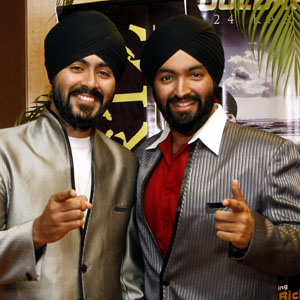 Goldkartz who are often regarded as the Malaysia’s Bhangra Ambassadors has been honored by the Malaysian Book of Records for the success of producing the First Malaysian Produced Bhangra Album. They received the award from the Minister of Unity, Culture, Arts & Heritage, Datuk Shafie Apdal. They are the symbol for Bhangra in Malaysia.
They have also been nominated and performed at the Malaysia’s most prestigious music award show Anugerah Industri Musik Malaysia (AIM) 2009. They have performed on many prestigious great platforms in Malaysia, Indonesia, Singapore, Canada, Australia and have shared stage with many local and international superstars such as Datuk Siti Nurhaliza, M Nasir, Mawi, Shah Rukh Khan, Udit Narayan, Sonu Nigam and many others. They have performed on huge stages in front of 100,000 audience several times. Goldkartz is famously known for its high energy performance and groove that gets the listeners feet tapping.
Goldkartz from Malaysia, has worked on a tremendous effort into the production of their 2nd Album entitled ’24 Karaatz’ which promises to be a one of a kind album with their unique signature sound to hit the International Urban Bhangra world. ‘24 Karaatz’ is Goldkartz actual Debut to the World. The album is launched by the First Lady of Malaysia, Datin Seri Paduka Rosmah Mansor which is an honour for Goldkartz and also recognition towards the Bhangra World. The album will be distributed globally by ‘Moviebox’ that is based in the UK and Warner Music in the South East Asia region.
Besides having done collaboration with Malaysia’s Artists, Goldkartz has worked with some of the greatest talents in the Urban Bhangra world, such as Rishi Rich, Mumzy Stranger, Tigerstyle, Punjabi by Nature (PBN), Bollywood’s Maestro Shankar Mahadevan, Boy Radge, Awie and others.
Achievements:
1. Received Malaysia Book of Records for producing the first Malaysian fully produced Bhangra Album ‘Loaded’ in 2008.
2. Nominated at Malaysia’s most prestigious music awardshow, Anugerah Industri Muzik Malaysia 2009 (Best Indian Song)
3. Nominated in 9 categories & won 3 categories at Voice Independant Music Awards 2012 (VIMA Awards 2012) (Malaysia, Singapore, Brunei)
4. Nominated and won 1 category at Bite My Music Global Awards 2012 (BMM Awards 2012) ( Global, 50 Countries, 1000+ contestants)
5. M-Ji & Surj individually listed as Top 80 Sikhs in Malaysia in the Sikh Community in Malaysia project. The said list with full Biography was presented to Prime Minister of India, Dr. Manmohan Singh in 2010.
Producing the first local made Bhangra Album in Malaysia. Loaded (2008) was the first fully Malaysian produced Bhangra album. All recording, lyrics, mixing, mastering was done in Malaysia.
(ii) Goldkartz being the first Malaysian and from South East Asia to have produced and sing a song for a Bollywood Film in year 2011.
Goldkartz is currently working with a few top Bollywood directors for some upcoming Bollywood soundtrack projects.