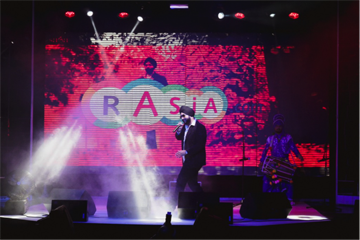 Strong partnership should be based on understanding, that is why Forum rASiA.com annually helds multinational Festival - which helps visitors and participants to get acquainted with the modern culture of other countries. At the best music venues in Moscow the stars from all over the world perfomed their show, as well as an exhibition of prominent Indonesian artists was held at the Forum.

Feature rASiA Festival in its format - is not only incendiary concerts and cultural programs, and also a closed dinner at which participants can informally discuss the business and aspects of contemporary culture.

One of the headliners of the festival were cheerful Goldkartz - which are often named after the style Bangra, originally from Malaysia, playing fashionable and contemporary songs, each of which - an echo and a reflection of popular ethnic music.

Unconditional discovery was Abi F Jones - British rising star that its memorable music videos and songs has managed to conquer the charts and the hearts of the Western Norwegian fans, and of course the Asian audience, writing an explosive duet with the star of contemporary Chinese pop scene Don.

Also striking was invited Russian boysbend Bitrates, which not only delighted the audience with their songs, and dance numbers in the best traditions of K-POP.

Russian audience greeted emotionally Asian stars and Russian artists. Groups of fans of Asian music styles already in the millions in the most popular social networks in Russia and the CIS.

The importance of understanding other cultures reminded incomparable and talented Irindzhan - whose compositions are based on the motives of the Buryat and send to the distant, yet not understood and not open secrets.

No less surprised and Ahmed SIDA - Expand your voice all the beauty of the Maldives, and hitting the audience over the familiar and favorite covers.

The participants also got acquainted with the work of Wiwik Oratmangun - Indonesian talented artist, combining his work poetics sunny islands and boundless beauty of ocean space.

rASiA.com Festival 2014 again provided an opportunity to touch the world without borders, the world of the future and innovation, where the main thing - it's not the language in which you say, but the idea that you carry.