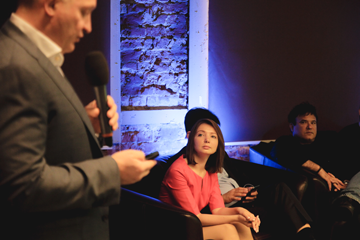 Three major areas: media, entertainment and sport are rapidly developing in the modern world. The impact of IT-technologies in these areas is great and this impact is a major factor in further development. The importance of content in all areas brings economy to new level making it creative. Russian entrepreneurs are seeking new ways for business in contemporary political context; these ways are leading to Asia. These trends were picked by rASiA.com forum and were covered on both days of the event.

Became a key section of the event. It teamed up many world level experts as Ralph Simon, one of the founders of the modern mobile entertainment industry, Shaukat Shamim, one of the leading venture investors in Silicon Valley and one of the Yahoo! Messenger platform developers, Gino Yu, professor of Hong Kong Polytechnic University, head of a major group of scientists to create artificial intelligence, Allen Craig, founder of the company Spark Unlimited – computer games developer, former head of gaming division at «The Walt Disney Company» and many others.

Discussion on TELL Forum gathered a huge amount of colorful phrases from experts. Charlie Rapino Kylie Minogue and Ennio Morricone record producer admitted that technology makes him lazy and programs like Shazam are simplifying his work. Experts touched the theme of product promotion: according to professionals advertisers are interested in the following questions in promoting innovation: «Is it cool?» and «Does it work?». Concluding remarks of this section were made by Ilya Bachurin, founder and CEO of GlavKino. According to Ilya "now the line between cinema and television is blurry and the Internet content flows on the TV".

Forum began with a discussion about the use of IT-technologies in the three already mentioned areas. It brought together the leading experts in corresponding industries discussing various issues including the most unusual: "When the game is going to merge with reality?", "Could Mark Zuckerberg invent something if he had lived in Tula?", "How YouTube changed your life and the whole world"? One could find answers to these and the other questions only at the Forum rASiA.com.

The first day of the event also opened the Russian Innovation Pavilion. It gathered the best Russian startups presented their innovative approaches and showed them to foreign experts. Among the projects which attracted attention were companies Playdisplay, specializing in the creation of augmented reality, and Displair, presented an invention that allows you to display an image on airflow and many others. Russian Innovation Pavilion has a national status and was created to display Russian startups and technology to international market, offering unique solutions and services to the global Media, Entertainment & Sport sectors. That is why Russian Innovation Pavilion will be presented at the largest and most efficient global markets: forums and exhibitions in Singapore, Hong Kong, Cannes, Seoul, Austin, Davos, etc.

TELL Forum worked simultaneously with TELL Conferences sites devoted to topics of media and content, banks and payment systems, amazing innovation, telecom and many others. Since this year‘s official rASiA.com partner-country was Indonesia, there was the special session «Doing business with Indonesia». Djauhari Oratmangun, the Ambassador of the Republic of Indonesia in Russia, took part in this debate on the Forum. India was a partner-country in 2013 and Japan was in 2012.

TELL Academy gave an opportunity to some students to interact with professionals from the US, UK, and Russia. Students not only were lectured by professionals but they also presented their first projects. For example, one student used her chance and surprised Christian Ulf-Hansen, director of C-Plan Music and management. She received a few specific tips from the expert afterwards.

During The Forum several lectures were given and gala dinner was organized. Top 100 Global Creative Leaders is a new framework of communication when global experts and best specialists from various sectors choose worthy candidates amongst themselves to communicate in an informal atmosphere. Here the selected evening-leader shares her/his thoughts on and development of the world and of a particular sector. Meeting is semi-confidential, it is governed strictly by invitations and recommendations. This year representatives of the Top 100 Global Creative Leaders from Russia and the other countries from the five continents have chosen Gino Yu and Ralph Simon as honorary lecturers. They had the floor and the attention of the public for the evening. The next dinner and lectures are to be in Singapore in September.

Cultural program rASiA.com Festival was offered to all participants of the Forum in addition to the business program. The key event of the festival was a party in the "ARTIST CONCERT HALL". The most vivid performances were presented by Abi F. Jones, British singer, young but already popular in the UK, Goldkatrz - unusual Malaysian band merged POP and ethnic motifs in their music. Spectators were also moved by a new band BITRATE - seven singers and dancers. It can be considered as an adequate response to Korean K-POP boy bands getting more and more popular in the world. Irindzhan and Ahmed Shamrah, the latter came specially to the Forum from Maldives, also performed. Russian stars, pop singers and celebrities were spotted at the concert amongst youth - Asian music lovers. They were entertained by DJ Amaya Katsura.

Alexander Shulgin, composer, venture investor and the founder of networking platform rASiA.com comments on the site he created: "Our unique rASiA.com Forum has different spaces. All these sites are devoted to the major trends in IT, innovation, startuping, advertising, venture investment, telecom and other spheres. I think the next three years we are going to significantly increase the export of Russian IT-technologies as we have all the conditions for this: professional programmers, real conditions for creating data-centers, economic and geopolitical position of Russia. If we build a new Silk Road then a data traffic and communications between the Old and the New Worlds will flow in a new way. The so-called «New iSilk Way» will be presented in the latest solutions and become the largest drive of the new global creative economy, primarily, of course, Russian. "

All the innovative trends will not remain a secret — all presentations by business gurus in English and Russian ??are available on the Forum website:  http://rasia.com/2014/forum/ru/video-tell