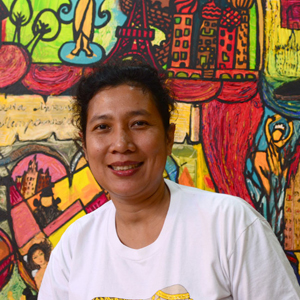 Erica Hestu Wahyuni was born in Yogyakarta on January 1, 1971.
Her artistic talent was notices since she was a child. Erica first experience in the field of visual arts was when she joined the studio Katamsi in 1981-1982.
After graduating from high school Erica entered the Indonesian Arts Institute (ISI), Yogyakarta in 1989. She started participating in exhibitions, had won awards for best sketches and watercolor paintings.
After that Erica decided to study to the Surikov Art Institute and continued her wandering up to China. International experience has left a big impression on the artist.
Erica‘s paintings are done in the Anka style which does not know the dimension of space, perspective and form. At first glance one can confuse her works done in oil on canvas with a work of a child, but it is only at the first glance: details, symbolism and choice of color speak of the mature artists.
Erica is one of very few full-time women artists actually born in Yogyakarta and till living there.