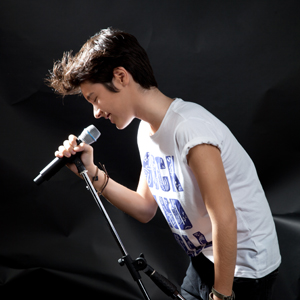 Kristian Kostov (born March 15, 2000)- is a young, yet popular Russian singer. Born in Moscow, Russia, however ethnically half European - half Asian. At the age of 6 he was accepted through casting into a prestigious children vocal, instrumental and dancing group «Neposedy». It is known for raising famous singers such as Sergey Lazarev and «t.A.T.u.». Not much time passed as Kris started singing in large-scale concerts throughout Russia.
In 2011 he left the group to enter a different one, which allowed him to flourish as a solo singer. Also, since that time he started taking part in different singing competitions. On the competition called «Sound kids» he won the Grand-Prix and met one of the representatives of a jazz & soul project called «JazzParking». He was accepted as a resident in the project without a casting due to him being recognized unanimously by its’ entire committee.
In 2012 takes part and becomes a finalist in an international vocal competition called «New wave Junior», where he represents Bulgaria.
The same year he is invited in an American Idol-esque TV-show called «Shkola muzyki» («School of Music»), where he takes the 3rd place. This marks the start of his own fan club.
In 2014 Kristian takes part in the biggest competition of his life - The Voice Kids. He storms through the blind auditions performing the song by Alicia Keys «If I ain’t got you» with all the judges turning to him. Upon reaching the final round of the competition, only he, out of all 6 contestants, makes the brave-close-to-reckless act of choosing an unknown song by an unknown artist. Though he didn’t pass on to the super final, the decision wasn’t in vain. On the contrary, the song is now in the playlists of hundreds of thousands people throughout Russia. Moreover, tens of thousands of Kristian’s fans know the song by heart and sing it together with him at all of his concerts.
Today, Kristian Kostov is the highest in demand singer of his age group in Russia. Currently, Kris is invited to different TV-shows and musical events. At the moment, he has more than 20 scheduled concerts in 15 Russian major cities and the number of offers is rising day by day. Not long ago, his own Youtube channel was presented to the public, where he attained 1000 subscribers in 2 days and 4500 views in 24 hours on his debut cover video «When I was your man» by Bruno Mars. Right now, Kris isn’t burdened by a contract with any producer or a recording studio, so he is open to new offers and projects.
In November 2014 Kris took part in the #Imagine Event (Unicef). He performed on the same stage with such artists as Yoko Ono, Hugh Jackman, Angelique Kidjo, Daniela Mercury, Don Jazzy and many others. He was the only artist from Russia, who participated in the event, which was produced by David Guetta and took place in the UN General Assembly Hall.