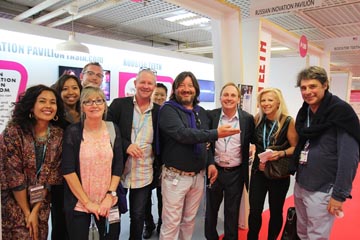 One of the largest international markets for audiovisual content and MESTech sector - MIPTV 2015 was ended on April 16, 2015 in Cannes

The event was visited by 11,000 participants from more than 100 countries, including 3,800 buyers and 1,600 content of media and technology companies-exhibitors. From Russia  this year's MIPTV attended by representatives of 106 domestic film and television companies. Among them a platform predstavilNatsionalny Russian Innovation Pavilion rASiA.com ™, uniting in sebetehnologicheskie innovators and start-ups the latest digital solutions Tech. For the Russian Pavilion innovation is the seventh season of participation in events organized by Reed MIDEM.

During operation of the global market MIPTV 2015 it signed a contract for an investment of about $ 3 million in the multimedia content of young production studio from Italy. They also established new communications and collaborative arrangements, and secured the already established business relationships.

Warm spring weather, set in these days on the French Riviera, has contributed to the work and cooperation. Among the new potential partners have been companies such as pond5 (USA), InterLake (Germany), Globecast and Wildmoka (France), TodotvMedia (Latin America), Opera Software (Norway), as well as a large number of companies from all regions of Asia: Web TVAsia and PrimeWorks Studios (Malaysia), Dentsu (Japan), Mega Media and China Huace Film & TV Co., LTD (China), Kiyoshi (India) and many others.

With great success took place two Russian Netvorkingovyh Events organized on April 14 and 15 at the booth of the Russian Innovation Pavilion rASiA.com ™. These events are the hallmark of the stand and held regularly at all exhibitions anywhere in the world. During their participants and guests of the Pavilion are introduced to represent the company and the activities of both Russian Innovation Pavilion rASiA.com ™, as well as with the activities of friendly companies. This time they took part in more than 100 media representatives, technology companies and global sector content. These activities are distinguished by a special warm atmosphere that contributed to the interest of participants in further cooperation.

Work Russian Innovation Pavilion rASiA.com ™ within MIPTV 2015 has attracted a lot of new people and companies wishing to participate in the annual International Innovation Forum rASiA.com ™, which will be held June 22, 2015 in Moscow.